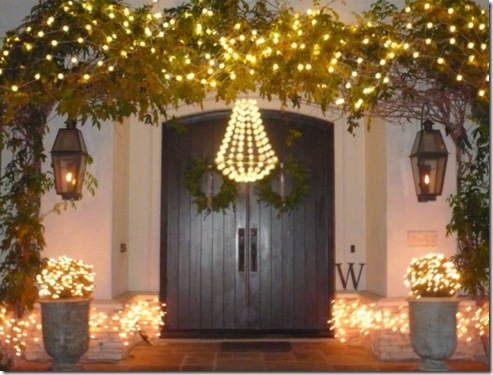 {Sally’s Amazing Christmas Lights – I was dying over the cool chandelier! It is from Ikea, but unfortunately she bought it last year and it is no longer available.}
This past Saturday night, Fabian and I attended Sally Wheat’s fabulous Christmas soiree. If her name sounds familiar, you most likely know her from her many mentions in the blogosphere, including La Dolce Vita and of course, Cote de Texas’ “Stalking the Wheats” blog post. I was excited to attend my friend’s party, but I was equally excited for Fabian to see Sally’s home in person! It is such an inspiring space and I knew that Sally would do something amazing for her Christmas decorations. 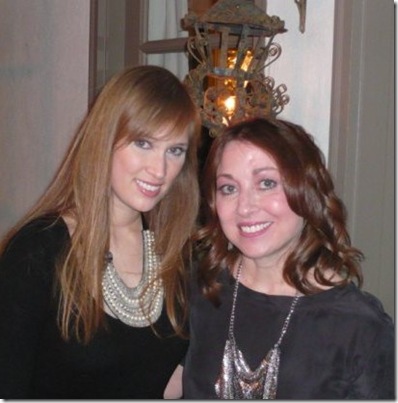 In the time that I have been doing this blogging gig, I’ve had the opportunity to meet many designers/decorators and Sally sits at the top of my list. She is fiercely talented and possesses a style that is so unique, especially for Houston. She can take a traditional French or Swedish look and turn it on its head by infusing it with her eclectic and slightly subversive touch. In addition to her talent, I love Sally for being so sweet and down-to-earth. Like me, she is a former school teacher which makes me feel like we are kindred spirits. One can hope!
Anyhow, Sally encouraged me to take some pictures of the house if I wanted to (of course I did). I think Fabian was a little embarrassed that I took her up on her offer, but alas, I am a blogger. It’s what I do and quite frankly, I’ve taken pictures of more inappropriate places to share with my lovely readers. Remember the bathroom in London I photographed for you? I tried to be discreet and not bother the other partygoers, so I kept the flash off. I apologize if some of the pictures are a little dark, but I am sure that you will still be able to enjoy them. 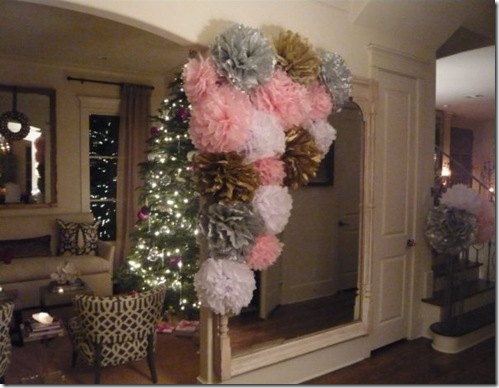 Upon walking in, we were greeted by these fabulous pom poms. I love the palette that Sally chose and that they aren’t typical Christmas colors (though my own decorations are red and green). The pom poms add such a fun, festive touch! 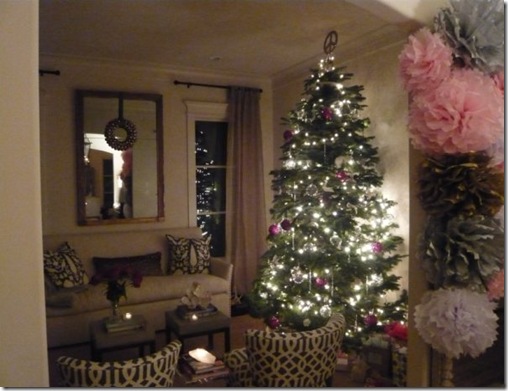 Sally’s formal living room looks a little different than it did when it was published in Houston House and Home earlier this year. The trellis chairs are still there, but everything else is new. Her Christmas tree is decorated with silver and fuchsia ornaments. I love her peace sign tree topper! The ornament wreath over the gilded mirror is great, too. 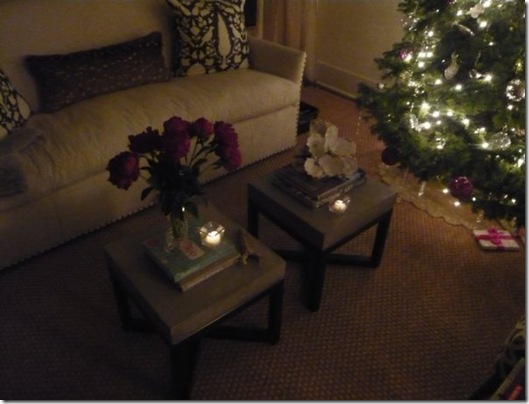 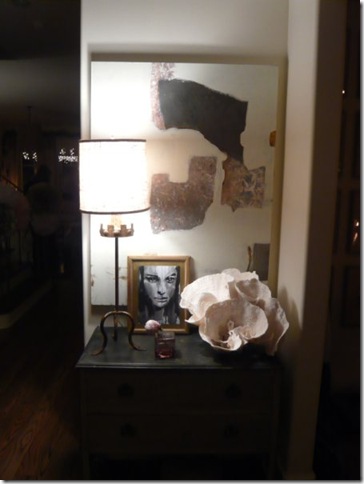 This little table in the foyer was new to me. I love the way Sally has styled it. I remember when she bought the coral rose at the Urban Market in May. She came over to my booth and told me she had just gotten it for a steal! After visiting Erin Martin’s showroom in St. Helena, I know that Sally definitely got a great deal. 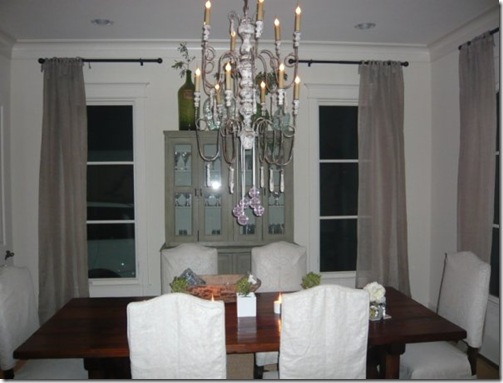 It’s a little difficult to tell in this picture, but the dining table has a few small flower arrangements and votives on it. Notice the disco ball ornaments hanging from the antique French chandelier. 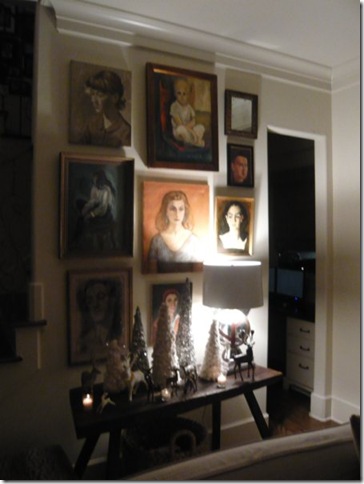 I love this vignette! It is one of my favorite things in Sally’s home. The table has been cleared of its usual accoutrements which have been replaced with reindeer and Christmas trees. 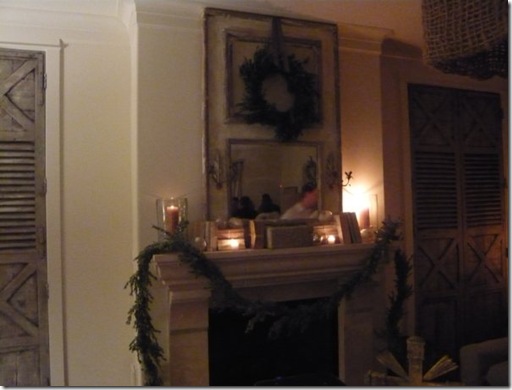 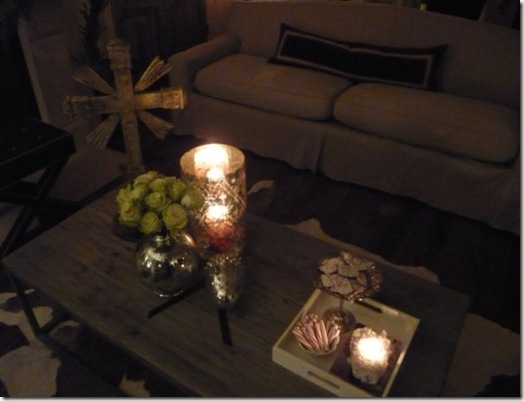 Sally had the most beautiful mercury glass and plain glass candle holders everywhere. They lent such a lovely warmth to the party. The coffee table features a few of those candle holders along with cerulean roses and peppermint bark. 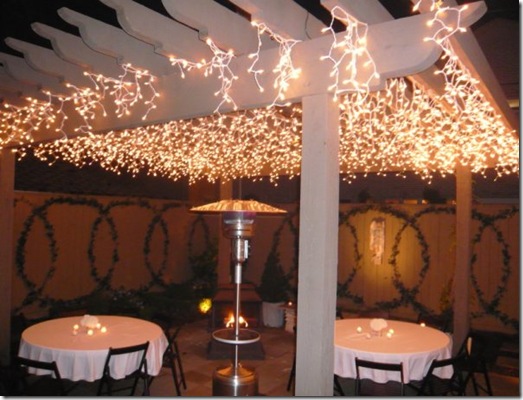 The patio was all aglow. 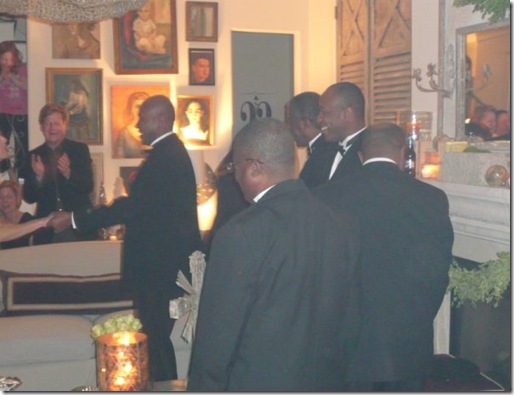 The Wheats had the most wonderful Motown A Capella group sing Christmas carols for their guests. We all joined in and had so much fun! “The Twelve Days of Christmas” was an all out sing-along and Fabian and I were asked to sing the part of “Two Turtledoves”. It was a blast!
From the décor to the entertainment to the food (catering from one of my favorite restaurants, Shade), the Wheats know how to throw a great party! Thanks for a lovely time, Sally!
27 Comments
Subscribe to the blog
Shop The Post
You May Also Like...
High Gloss
Boxwood Interiors
Last week, my friend Jeni came to visit from California and I took her...
holidays
Here’s to a Fabulous 2010!
My friend Mica, of Business Bombshell recently sent me a fun survey about 2010...
Christmas
Merry Christmas!
{My Little Christmas Cockapoo, Tate, 9 months} I am officially signing off for the...
A Note on Style
La Dolce Vita’s Holiday Wish List
This year has been a wonderful one for me. I have received so many...
Antiques
Browsing at Memorial Antiques & Interiors
The other day, I had some extra time before my first appointment, so I...
houston
Lovely Bones
It’s been a little while since this lovely French-inspired home came on the market...