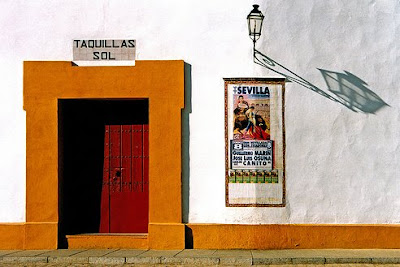 It is no secret that I am dying to go back to Spain. I absolutely fell in love with it this past summer. The next time that I visit, I want to explore the Andalucía region in the south, which just so happens to be home to the gorgeous city of Seville. 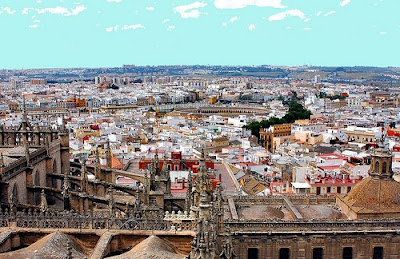 The city has a population of about 700,000 and is situated on the plain of the Guadalquivir River. “The long Moorish occupation of the Iberian peninsula, from 711 A.D. to 1248 A.D., left indelible traces in Seville as in all of Al-Andalus. La Giralda, the tower of an important mosque, is the most well-known of the remaining Islamic monuments. In 1492 Seville played an important role in the discovery and conquest of America. The 17th century was a period of artistic splendour in Seville. Painters such as Velázquez, Murillo and Valdés Leal, and sculptors like Martínez Montañés were born in Seville and left behind important works. The city also assumed an important role in world literature and was the birthplace of the myth of Don Juan.” 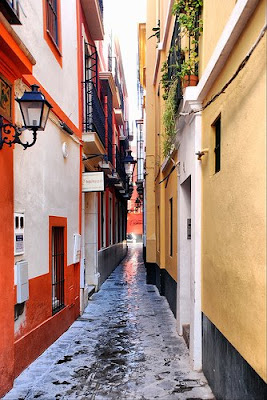 It is a beautiful city of narrow, winding cobblestone streets. 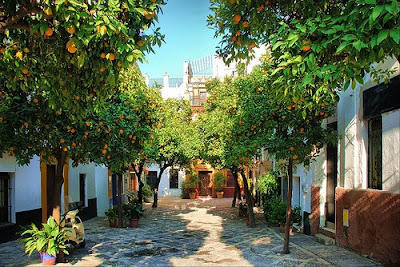 The architecture varies from one region of Spain to the next. The Andalucía region is typically home to whitewashed buildings with Spanish tile roofs. Seville is also famous for its abundance of orange groves. It is said that the aroma of oranges fills the city. I’d take that over smog any day! 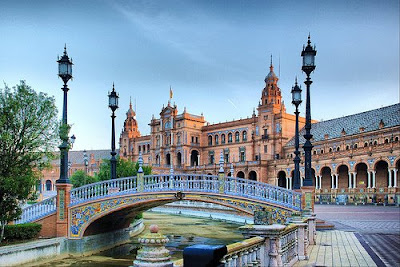 The Plaza de España is the city’s main square, the place around which life revolved centuries ago. The history of the region is evident in its architecture. 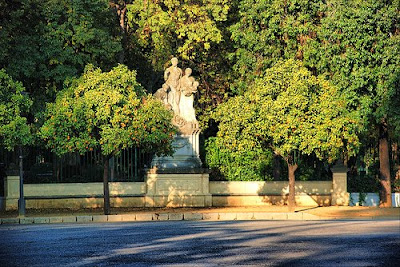 The city’s main park was a gift from Infanta (Princess) María Luisa in the 1800s. 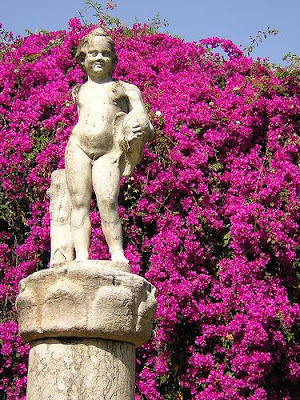 A Statue Stands Watch over the Casa de Pilatos 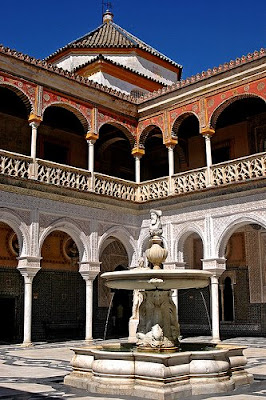 The Casa de Pilatos is a private Moorish Palace 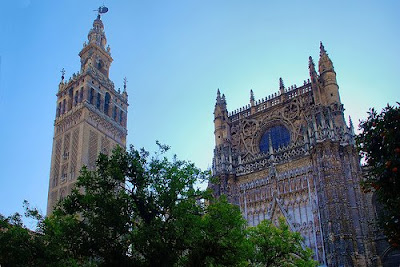 The Symbol of Seville: La Giralda. La Giralda is now the bell tower of Seville’s Cathedral, which exemplifies Gothic and Baroque styles. However, in keeping with Seville’s past, the tower was once an ancient minaret for the Almohad mosque of Seville. Did you know that the clock tower of the Ferry Building in San Francisco was modeled after La Giralda? 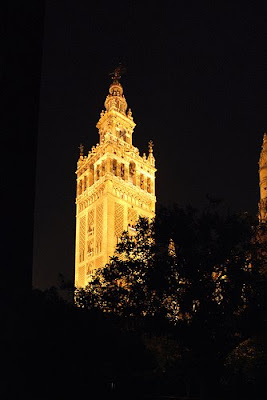 I love the way most Spanish buildings look when they are lit up at night. It is as if they are glowing from within. This is a result of the materials used in the building. The city of Salamanca is gorgeous like this at night, as well. 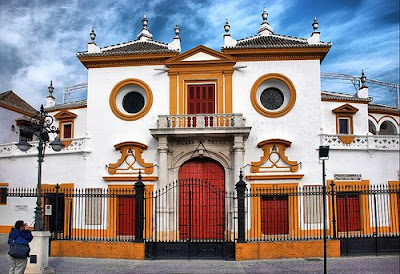 Seville, and the Andalucía region as a whole are the birthplace of the cultural elements most people think of when picturing Spain. The art of bullfighting (regardless of your beliefs on the matter, it truly is an art. I was able to learn a lot about it while in Spain last summer) originated here. This is the facade of Seville’s bullring. 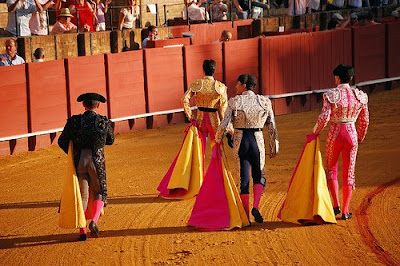 Several Matadores in their Beautiful Costumes 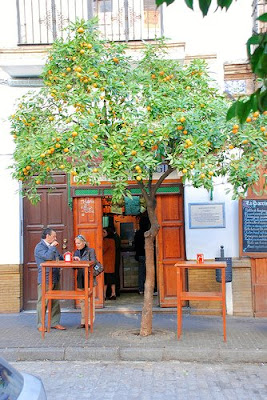 Another typical cultural element of Spain is the culinary tradition of Tapas, or small plates. They also originated here. Notice the orange tree outside of this Tapas Bar. 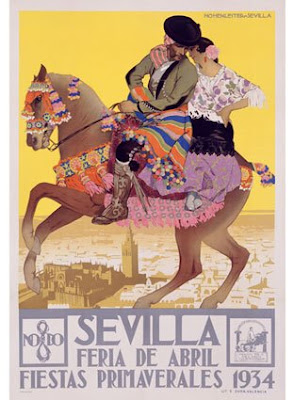 April is a very exciting time in Sevilla because it is when the “Feria de Abril” takes place. The Feria is a week long party that welcomes over one million people each year. What began as a cattle trading fair in 1847 has evolved into a celebration of Flamenco dancing and culture, which also originated in this region. The city of Seville is considered to be the center of flamenco music and culture, also known as “Sevillana” as many of the composers and songs originated there. Every year, a new poster is created in order to promote the Feria. There are many gorgeous vintage Feria posters. In fact, the older ones are my favorite. 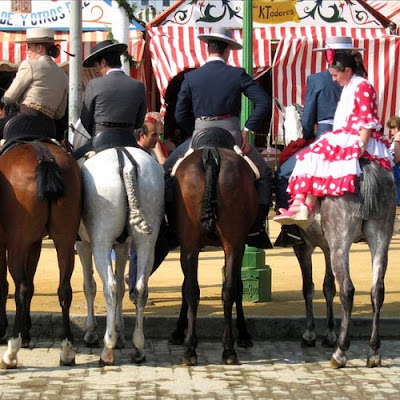 During the day, the Feria hosts “daily parades of horses and decorated carriages that wind their way through the city and fairground. This equestrian display is accompanied by strolling singers who play traditional Sevillana ballads on their guitars. Many participants in these parades are members of Seville’s aristocracy, and they are exquisitely outfitted in the unique wide-brimmed “bolero” hats and short-cropped jackets that are closely associated with Andalucía.” 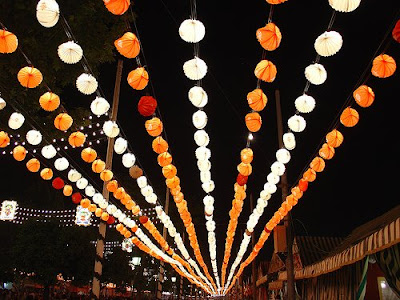 At night, everyone relaxes, enjoys some Andalusian Sherry, and dances. 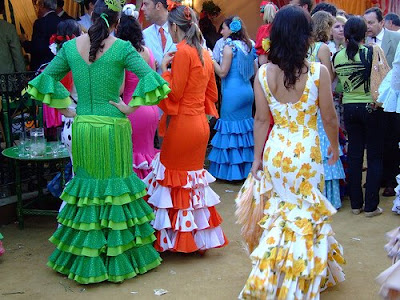 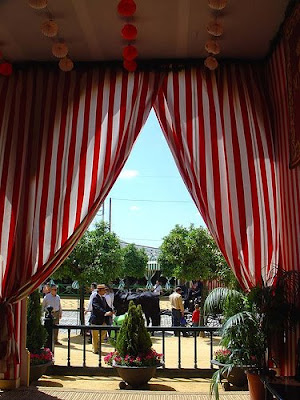 The Feria is set up near the Guadalquivir River. Hundreds of private tents, called “casetas” are set up. They are made of brightly striped canvas and are adorned with paper lanterns. 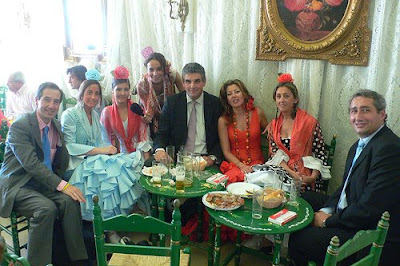 The casetas are hosted by the aristocratic families of Seville, trade unions, or political parties. Each has its own traditions and atmosphere. Some are very exclusive and are “by invitation only”, while others are open to the public and have a more casual, relaxed atmosphere. 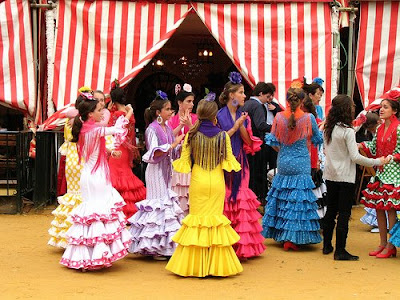 The Flamenco costumes are so vibrant!

This year’s Feria kicks off next week! If you are wondering where to stay I have a couple of suggestions. The first, pictured above, is the Hospes Las Casas del Rey de Baeza, a hotel located in an 18th century house in the traditional style of the region.

The hotel is actually an oasis from the noise and excitement of the city and the Feria. It is well known for its privacy and soothing atmosphere.

The traditional Spanish building opens up to two seperate courtyards, around which everything is centered. I love the whitewashed walls and Robin’s Egg Blue trim.

The accomodations are quite modern and luxurious. All of the rooms open up onto the central courtyard. There are oranges here, too!

The hotel features a rooftop pool.
The second option is the Eme Fusion Hotel, a sleek, hip, newer hotel property with an unbeatable location and vibrant atmosphere. 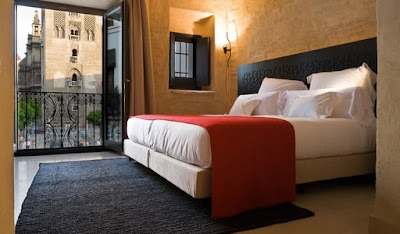 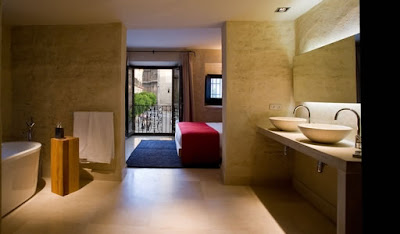 The guestrooms feature sleek finished, many amenities, and ample space. 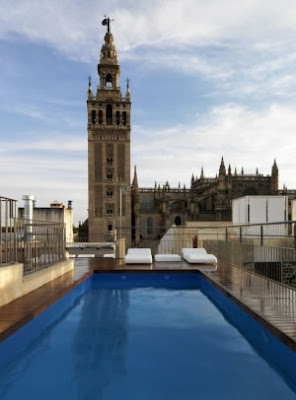 The rooftop features a lounge and pool directly across from La Giralda. 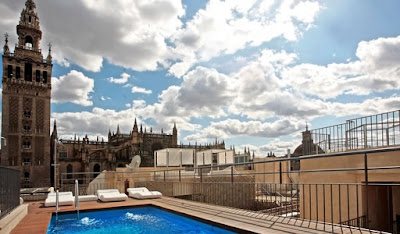 The location and view are unbeatable. Does it get any better than this? 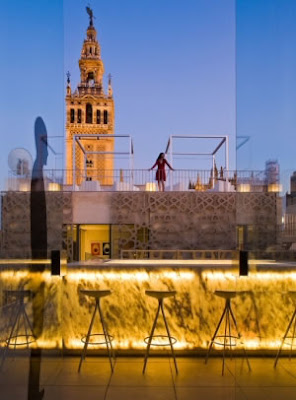 A cool shot taken from the bar looking up toward the rooftop terrace. 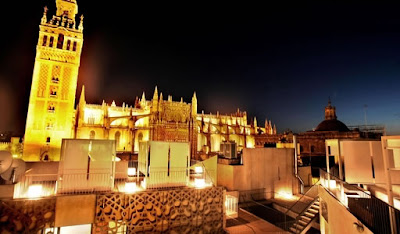 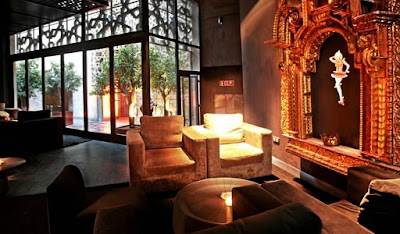 The lobby at the Eme Fusion Hotel 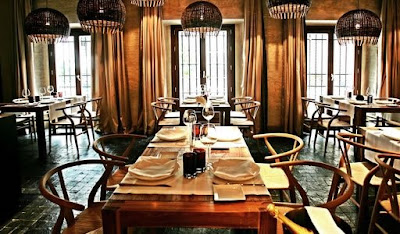 The Eme is home to several eateries including the Santo Restaurante Mediterráneo, pictured above. I love the rustic tables, chairs, and chandeliers. They add a nice contrast to the fiercely contemporary feel of the rest of the hotel. 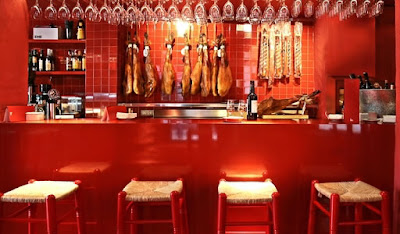 The Milagritos Bar de Tapas is another culinary option at the Eme. Remember, tapas originated here! 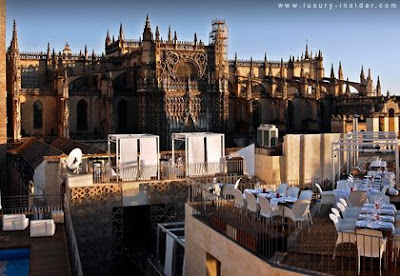 One Last Look at the Spectacular Eme Fusion Hotel

So tell me… does Seville look like a place you’d like to visit? Does the Feria de Abril look like something you would want to experience? Where would you prefer to stay, at the quaint Hospes Las Casas del Rey de Baeza or the hip Eme Fusion Hotel? If you’ve been to Seville, I would love to hear about your stay there. I hope you have a fabulous weekend, regardless of where you spend it!

In the Mood
In the Mood: January 2021
{Bunny Mellon’s Townhouse} Happy New Year! With a new year, comes opportunity– a clean...

In the Mood
In the Mood: November 2020
{My Living Room | Photography by Kerry Kirk} I just love green! I especially...

LDV Edit
LDV Edit: The Net-A-Porter Friends & Family Sale
If you’re in need of a fall wardrobe refresh, there’s no time like the...