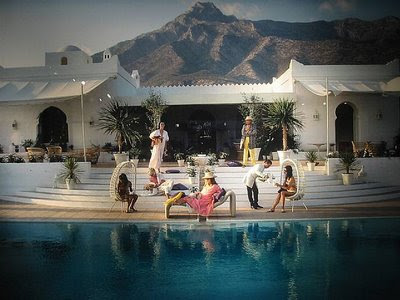 It’s no secret that I love to travel. However, I hardly ever go on vacation with the intention of relaxing. Some people prefer to take their holidays on cruise ships and beach resorts, which I am sure is great, but it’s just not our style. Fabian and I usually opt for city vacations where we literally walk all day, hit up the museums, see the sights, take in the sounds, tastes, and smells, and immerse ourselves in other cultures. As incredibly fun and rewarding as our trips have been, they can also be a little tiring. Lately, I’ve been thinking about how nice it would be to get away for the weekend and just go somewhere to relax. No itinerary, no pre-planned events, just a weekend bag, some good books, and some sunscreen. 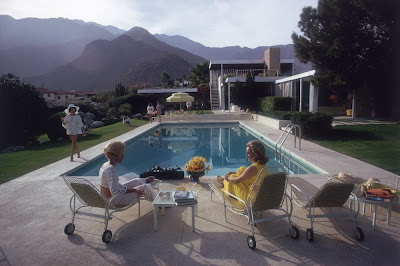 Enter Palm Springs. It seems totally laid back, with a glamorous edge. The glitterati have flocked here since the 1950s and 1960s and it seems like it has had quite a big resurgence lately. Architecture and design buffs have been in the know about Palm Springs for a very long time, but as the Mid-Century and Regency styles continue to grow in popularity, so does Palm Springs.

When I think of Palm Springs, Slim Aaron’s beautiful photographs from the 1960s and 1970s always come to mind. I think of the gorgeous Mid-Century architecture and glamorous cocktail parties filled with beautiful people and drinks with maraschino cherries and little umbrellas (they were cool back then). Wouldn’t it be fabulous to see the gang from Mad Men take a little trip to Palm Springs? 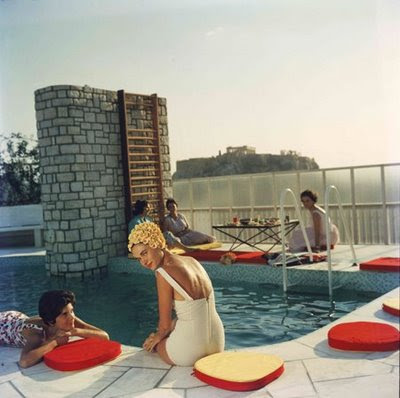 Palm Springs has enough to offer to keep you entertained without feeling overwhelmingly busy. It is regarded as the “golf capital of the world” and has plenty of courses to offer any golf aficionado. One can revel in the beautiful architecture which is quintessentially Palm Springs, with its clean lines, use of glass, natural materials, and combined indoor/outdoor spaces. You could even take in a show at the Annenberg Theatre or go horseback riding.

If you are planning to visit this April, you can hit up the Coachella Festival on April 17th through 19th. It is kind of like Woodstock for hipsters. This year’s lineup includes Paul McCartney, The Killers, The Cure, The Yeah Yeah Yeahs, The Tings, Morissey, Molotov, Franz Ferdinand, and about sixty other acts. If I ever make it to Palm Springs, you can rest assured that I will have the intention of doing little more than admiring the architecture and taking in the sun and relaxing atmosphere. 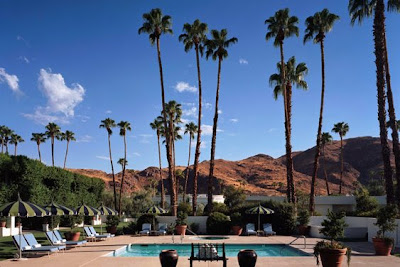 Palm Springs has a plethora of stylish hotel options, or you can opt to rent a private house, though they don’t come cheap. And remember…the goal of visiting Palm Springs is to relax! The Kelly Wearstler designed Viceroy Palm Springs has received a ton of notoriety and is a favorite of many with its regency-styled interiors and color palette of black, white, and yellow. As much as I love the Viceroy, I know that it has certainly made its rounds in the blog world, so I have opted for a few different hotels.

First up, The Parker Palm Springs: 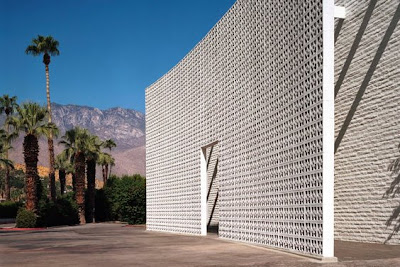 This super stylish Jonathan Adler designed resort was once Gene Autry’s Melody Ranch and Merv Griffin’s Givenchy Resort and Spa. The Parker now sits on thirteen acres and features 131 guest rooms of various types, 12 private one bedroom villas, and the two bedroom Gene Autry residence. The resort also features a “five star diner” called Norma’s, Mister Parker’s brasserie, and the poolside Lemonade Stand. The resort is also home to four European red clay tennis courts, an 18 hole golf course and a spa. Coincidentally, it was also the subject of a Bravo reality show, “Welcome to the Parker”, which just so happens to be the one Bravo show I haven’t watched. 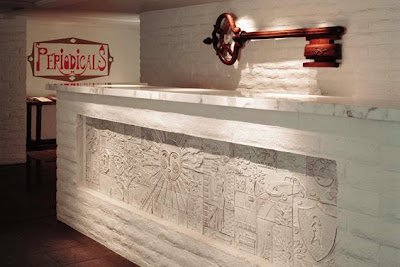 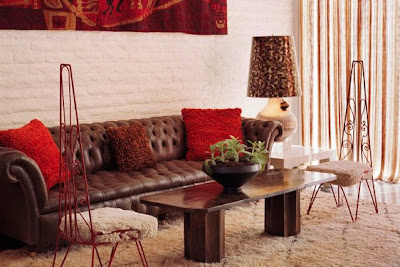 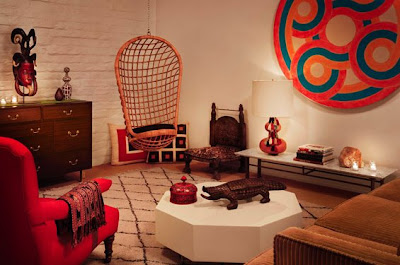 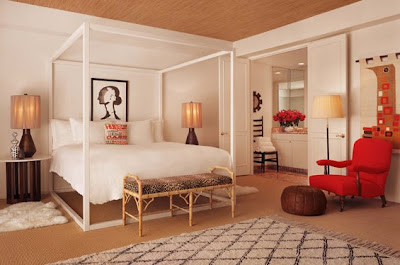 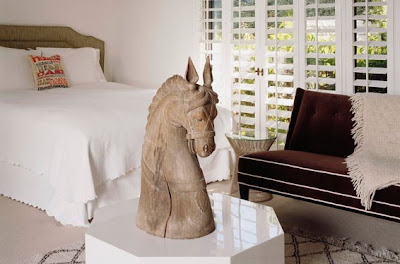 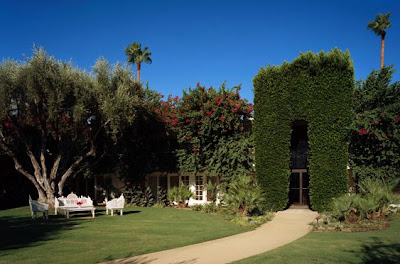 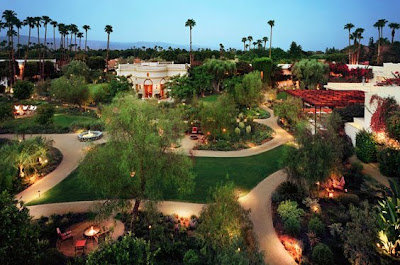 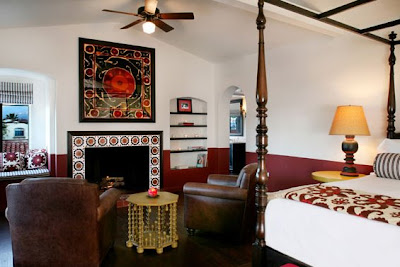 This spectacular Spanish Colonial style hotel was once owned by reputed mobster Al Wertheimer and was once a legendary speakeasy and brothel. It first opened in 1936, then changed ownership in 1940, after which it was a haven for Hollywood’s elite well into the 1960s. It recently underwent a fabulous facelift by designer Martyn Lawrence-Bullard. I absolutely love the bright colors, suzanis, and ethnic textiles. The hotel has quickly regained its hot spot status since its re-opening. Condé Nast Traveller featured it on its 2008-2009 hot list, calling it “a weekend retreat for Hollywood’s music- and movie-industry elite and stylish guests from points beyond…A chic, poolside scene is fueled by the bar-restaurant Purple Palm.” 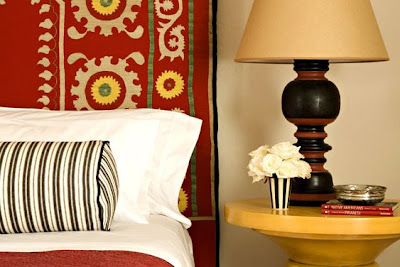 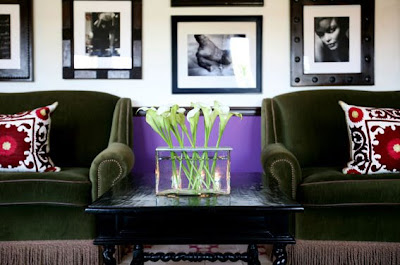 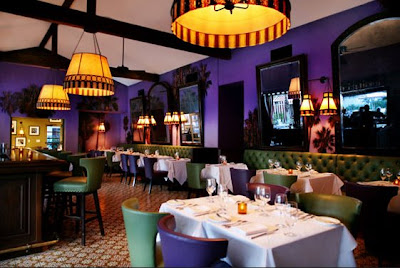 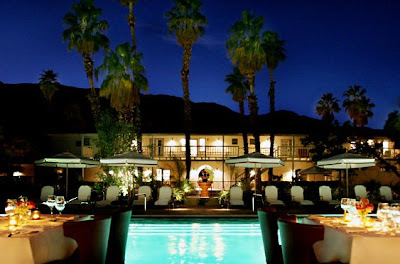 Last, but not least is the Riviera Palm Springs Hotel: 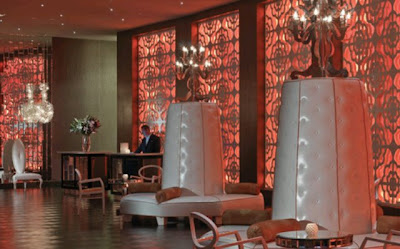 The Riviera Palm Springs is a decidedly swanky and glam destination. The hotel first opened in 1959 and was modeled after the great Las Vegas hotels of the era. It quickly became a stomping-ground for the heavy hitters of the entertainment industry. It was a favorite of Frank Sinatra, Dean Martin, Elvis Pressley, Connie Francis, and Jayne Mansfield.
The legendary 24 acre hotel property recently underwent a modernizing transformation and just re-opened in the fall of 2008. It is a large property, featuring 406 luxurious guestrooms, the Circa59 restaurant, The Starlite Lounge, Bikini Bar, and SpaTerre, an 11,000 square foot Noble House signature spa. San Diego-based Rossi Architecture and Chicago-based Delarosa Studio spearheaded the architectural overhaul and new interior design on this project. The result is a modern spin on the regency style and is undoubtedly rich in both color and glamour. 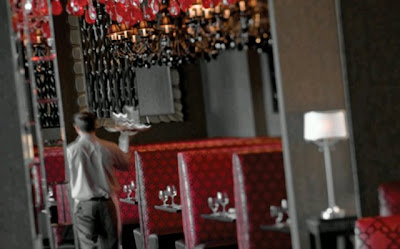 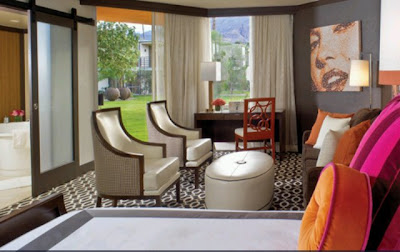 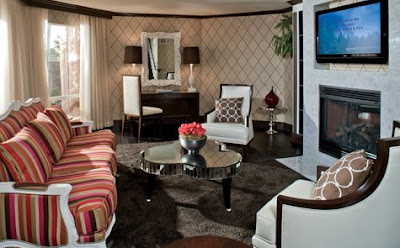 I have these brown pillows in my family room! 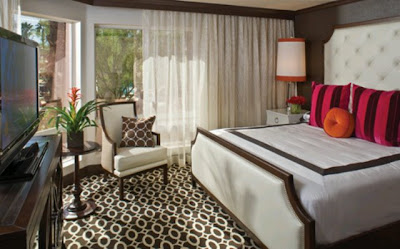 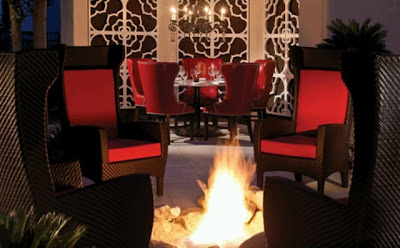 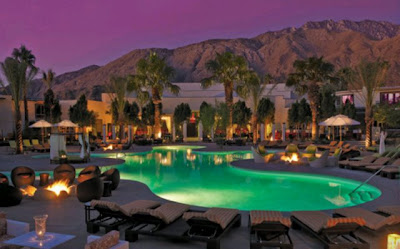