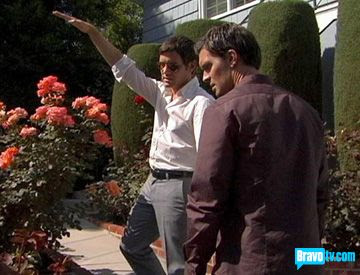 I really enjoyed last night’s season finale of Flipping Out. Mostly because it focused on what I love about the show: the amazing transformation of the homes (How gorgeous is Lorie’s house?!), the real estate deals (Lynn telling Jeff “I think you’re just awful.”), and Jeff’s hilarious antics and one-liners (asking Ryan if he and his entourage could move in for “a couple weeks, months”).
I wish that there would have been more of this throughout the second season as opposed to focusing SO much on the drama with the assistants. I know that the real estate market has taken a big hit in the Los Angeles area and that Jeff and Ryan didn’t have as many projects to share with us as they did in the first season, but I’m hoping things pick up for them soon and that someday, I will win the lottery so that I can hire them to come design my dream home.
Image via Bravo TV
5 Comments
Subscribe to the blog
Shop The Post
You May Also Like...
Fashion
Kell on Earth
{PR Powerhouse, Kelly Cutrone with former assistant Stephanie and new assistant, Andrew} Kell on...
Bravo
Flipping Out’s Jeff Lewis on QVC
Big news from Jeff Lewis via Facebook: “I’ll be selling my geometric chrome...
A Note on Style
Ryan Brown’s “Flip-Out-worthy” Pad
Ryan Brown’s design sensibility has appealed to me since the first season of Flipping...
Fashion
Olivia Palermo: Style Icon?
Back in 2008, I wrote a series on Style Icons. It included some of...
reality television
Spain…On the Road Again
I have enjoyed watching the Spain…On the Road Again series so much. Can you...
Bravo
Preston Lee’s Posh Home
Update: It has come to my attention that this home does not belong to...